Friends today we will know When Sewing Machine Invented. 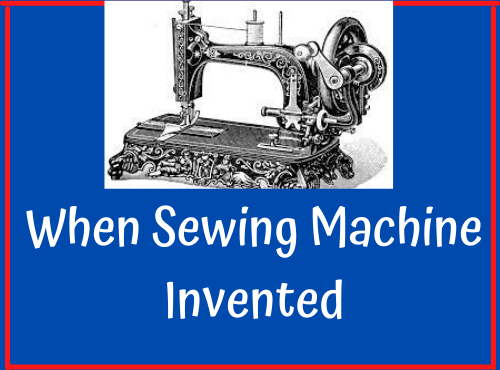 For the first time in history, the authorities of almost all the factories thought of arranging housing for the workers in order to save time and increase the demand of the time of the Industrial Revolution. In 1849, gold suddenly began to be found in some parts of California. Which is historically known as the California Gold Rush. As news spread, about 300,000 people from other US states and neighboring countries immigrated to California. Among the large number of immigrants was a 20-year-old boy named Levi Strauss who ran a grocery store there. He himself started making pocket full pants with metal pins in 183 for the shop. These pants were made of hard cotton fabric called Serge-D-Nimes which was later called denim. The popularity of denim pants began to grow very quickly and its commercial production further increased the demand for sewing machines.

In 1855, the American inventor Charles T. Wijenthal invented the two-needle sewing machine. On March 10, 1828, Henry Lai of Philadelphia obtained a patent for a leather sewing machine. But no model or record of their work can be found today. Barthelemy Thimonier of St. Etienne, France, made a sewing call in 1830 using a double-pointed needle. He was able to attach the needle to a bar attached to the wheel that could turn the sweetie up and down. In 1834, Walter Hunt of America designed a two-thread shuttle machine. In 1849, Hunt patented his invention. But the business failed to make a profit.

A list of the sewing machines being used commercially:

Many failed attempts at the beginning of the 18th century:

Attempts to make sewing machines in the early 18th century failed miserably. In this case, the attempts were first made using a needle on one side and a rotating handle on the other. But later when this design failed, the design was changed and success came as a result.

When it comes to making a woman self-reliant, the first thought that comes to mind is a sewing machine. That means we know and believe that a single sewing machine can turn a woman's life around. So much thought went into it. Every day we need a sewing machine for various tasks. Not every home has a sewing machine yet, but the demand is increasing day by day. If you have a machine in the house, it works a lot. Learning small things also reduces the hassle of going to the terrace again and again. Time and money live with that.

Please do not enter any spam link in the comment box.