The Stork And The Wolf Completing Story


Read the following outlines and develop them into a complete story. Give  a suitable title to your story.

A wolf gets a bone stuck in his throat - pain in his throat — beg helped - no helped a stork — pulls the bones out - wants his rewards—denied. 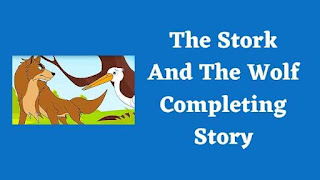 Or, Read the beginning of the following story and complete it is your own way. Give a title to it.

THE STORK AND THE WOLF

One day a wolf was eating meat. Suddenly a bone stuck in his throat (at). The throat became swollen. He couldn't take any food for it. He tried his best to take it! out. But in vain. He was running here and there for help. But nobody helped him. At last he saw a stork. He requested the stork to pick the bone out from his throat. promised to reward the stork. The wolf opened his big jaw. The stork took the bone out by his long beak. When the stork wanted to have his reward, the wolf said, "You should be thankful to me that you are still alive. I could have eaten you when you were between my teeth.

Or, Never believe a wicket.

Please do not enter any spam link in the comment box.